Our Friends Marie and Bernard Neary have recently returned from their latest visit to Madagascar and have provided us with the latest news of the work that they have been involved with:

Dear supporters and Friends, due to your amazing generosity we have been able to help many small organisations in Madagascar. This short newsletter is our way of letting you know how your donations were used and on behalf of all the beneficiaries and ourselves we want to say a heartfelt thank you to you all. Please be assured we have acknowledged all donors and have made it clear to those on the receiving end that the gifts come from many (named) supporters of Madagascar.

We bought a Japanese-made, new three-ringed table-top gas stove (no oven) and accessories, together with two filled bottles of gas, for a small, Malagasy Anglican community of nuns, who run a Health Centre and Clinic at Ambohidratrimo.  They also run a food programme for poor children in their district at Akany Hasina and had been cooking all their food on charcoal stoves, so it will make their lives so much easier.  A young supporter had requested that her donation be used to buy toys for poor children and after several visits to the local markets the donation was duly spent. We then bought a large plastic basket and filled it to the brim with toys to suit all ages.  We presented it to the children who attend Akany Hasina three days a week for a hot meal.  In a community of dire poverty the children were overjoyed with the gifts; most of them had never seen such toys in their young lives and had to be encouraged to play with them initially.

Our experience on the city dumps last year made us aware of the precarious lives of families and children who live among the rubbish. In our village a small dump was “growing”. Alongside the rubbish we saw two young girls, aged eight and thirteen, playing on the dusty ground among a few scrawny chickens.  With the help of a colleague who had befriended them we were introduced to the parents who explained they had fallen on hard times and were now making a meagre living on this piece of ground in return for caretaker duties of the site and at times donating some of their produce to the land owner – a barter system.  We can only describe their living conditions as akin to pre-famine Ireland. From your donations we discretely purchased two buckets for collecting water (for which they have to pay a daily fee), and badly needed cutlery and crockery.  Because of dire poverty they couldn’t send the girls to the local state school, the cost of the registration fee and books being beyond their means, making the parents feel very sad. With your donations we were able to immediately enrol both sisters in Saint Joseph’s, the local Catholic school; it is the only one in the area that has the resources to cater for children who have fallen behind in their studies.  The payment covered their fees until the end of this school year in July and included uniforms, books etc.  From September 2015 DEIS Madagascar has agreed to sponsor the girls’ education at an annual cost of €140 per student per year.

The small timber-framed two roomed building is home to the family of five. 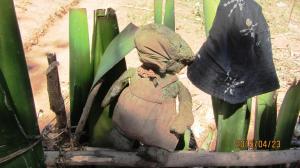 A handmade toy belonging to the children.

Nearly-new clothes were also supplied to the family, which was much-appreciated, as we saw when the children wore them going to school on their first day and on Sundays.

On your behalf we also contributed to Madagascar Music Uplift Programme (MMUP) established by Laurence Lagarde who works with poor children in our village. This programme aims to develop learning skills such as finger co-ordination, logic and concentration through the medium of music, thus empowering the children by growing their creativity, developing self confidence and ability to learn. Children who were falling behind in school are now passing each term with distinction. Over the past three years we have seen and heard at first hand the difference Laurence is making to the lives of many poor children here. Recently we have been lucky enough to hear the children prepare for their end-of-year concert.  To hear Swan Lake played by children from a small rural village in Madagascar was surreal yet very real. The donation to MMUP will purchase a new half-size violin and will be of tremendous assistance for the future success of the programme.  A big thanks from Laurence.

We met Sister Berthine in an English Club that we have been involved with over the past four years.  Berthine was there to learn English and she belongs to the order of The Sisters of the Immaculate Conception founded by a French Canadian nun in the 1800’s.  The congregation run a social centre called Mahereza Tsaramasay.  Here the sisters have a dispensary, a dentist and a pharmacy.  They also run health promotion courses for young women, vocational training, and a literacy programme that is free for those who cannot afford the small fee.  The sisters have a free feeding programme for destitute children, from babies at six months to children of five years.  On the opposite side of the road a three roomed school caters for sixty three street children of all age and different abilities for a small fee.  On the day we visited we also met a twenty nine year old man who had started school for the first time in his life and was proud to be a student. Sister Berthine accepted a parcel of nearly-new children’s clothes and on your behalf, together with a cash donation for the centre which will buy medicines.

A supporter of DEIS Madagascar, Síle Leech BSc (Hons), at her own expense, presented two separate courses in Indian Head Massage in Madagascar during May 2015.  Twenty-four students attended and successfully graduated, and in a country with an economy producing few formal jobs it is envisaged that many of the students will be able to secure paid work. DEIS Madagascar funded the local costs of the project (e.g. photo-copying, small bottles of massage oil, translation services and daily refreshments, as well as a graduation reception on the final day of each course).  A much sought after French-English dictionary and some educational books were distributed to two young girls and a mother of two.

Before passing away this year our dear Friend Doreen donated her cache of knitting needles, beautiful material of many shades and colours, sewing needles, wool, threads and other sewing accessories. These were gratefully received by the many recipients, a testament not only to Doreen’s generosity and experience of life in the developing world, but also to her awareness of the skills of those who could transform her donations into a living wage. Weighing ten kilos, these were shipped to Antananarivo free of charge courtesy of WORLD BOX, a new Irish delivery company.

Irish Friends spent long winter nights knitting hats and warm woolly jumpers for babies and small children that were greatly received at three Children’s Centres. The mornings and evenings are extremely cold for three months of the year, and as the children spend so much of their time outdoors, both parents and the children loved the new warm hats and jumpers.

Srs Georgette and Jacqueline and warm winter clothes for the poor children of their village.